If there is one product that goes back thousands of years, of daily use and capable of offering the best as well as the worst, it is soap! Whether it’s a basic, often scouring, hygienic gesture or a real care product that does good for the skin and the environment, the choice is yours. At TiL, we believe that soapmaking should remain a traditional craft, an ancestral art, which is treated like haute couture and constitutes a perfect meeting point between the skin, the body and the mind. And as soap is our daily companion, and even several times a day, we think that we are worth it☺️ 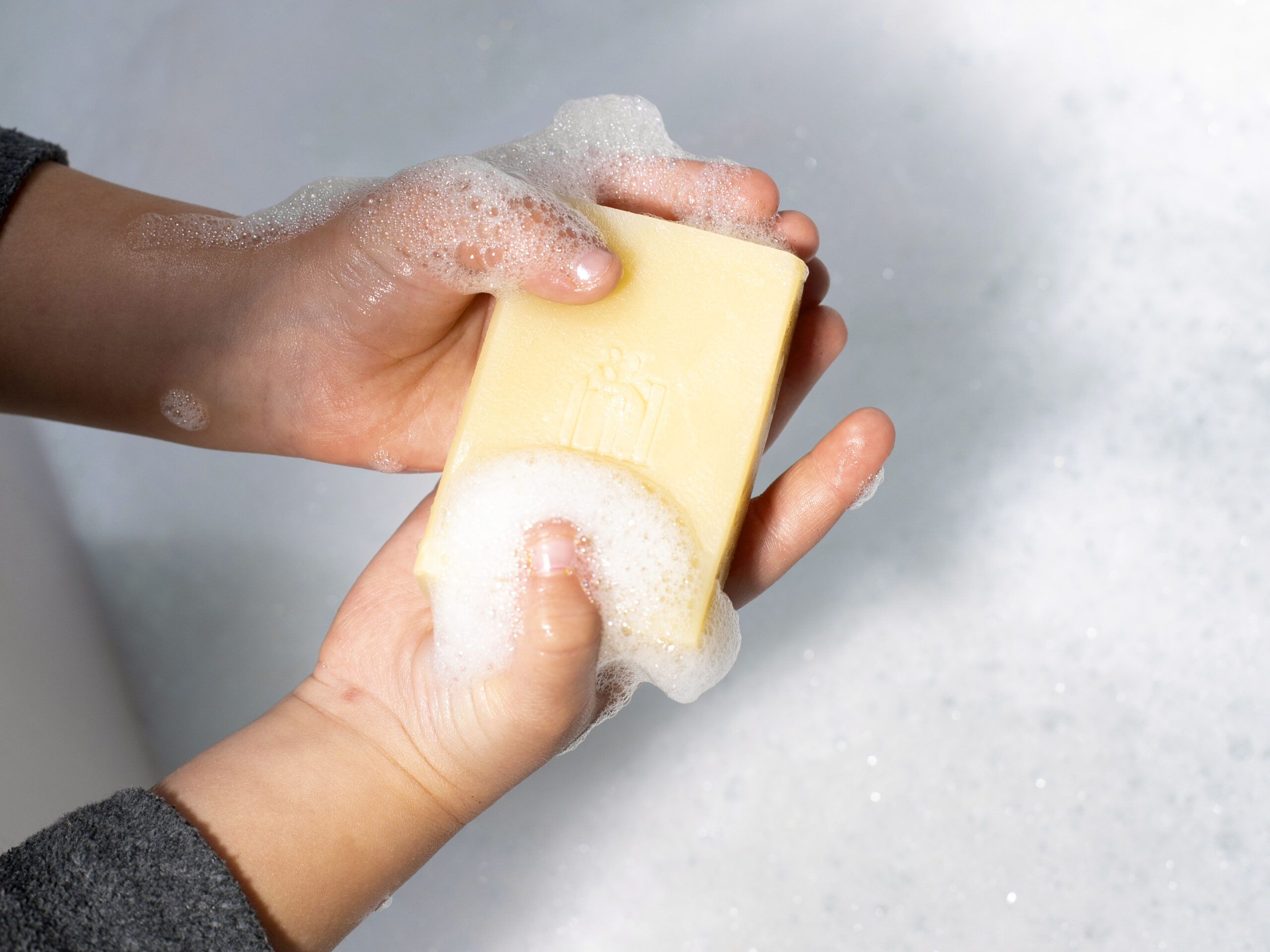 The first traces of soap date back to 2800 BC, on the tablets of the Sumerians in Babylon. It was then a mixture of oil, clay and ashes, used to wash wool. The Egyptians, for whom hygiene was essential, mention soap recipes on their papyri. The Romans used it to lighten their hair and the Gauls made their washing with a mixture of animal fat (goat tallow) and potash from wood ash.

Some soaps have become mythical throughout history: black soap, Aleppo soap, Castile soap or Marseille soap (made with heat and excess soda).

The Middle Ages were the time of public baths and steam rooms, where soap was used; but at the end of this period, water was considered to be a carrier of miasmas, and during the Renaissance, dirt was considered a natural protective barrier, until the 18th century. 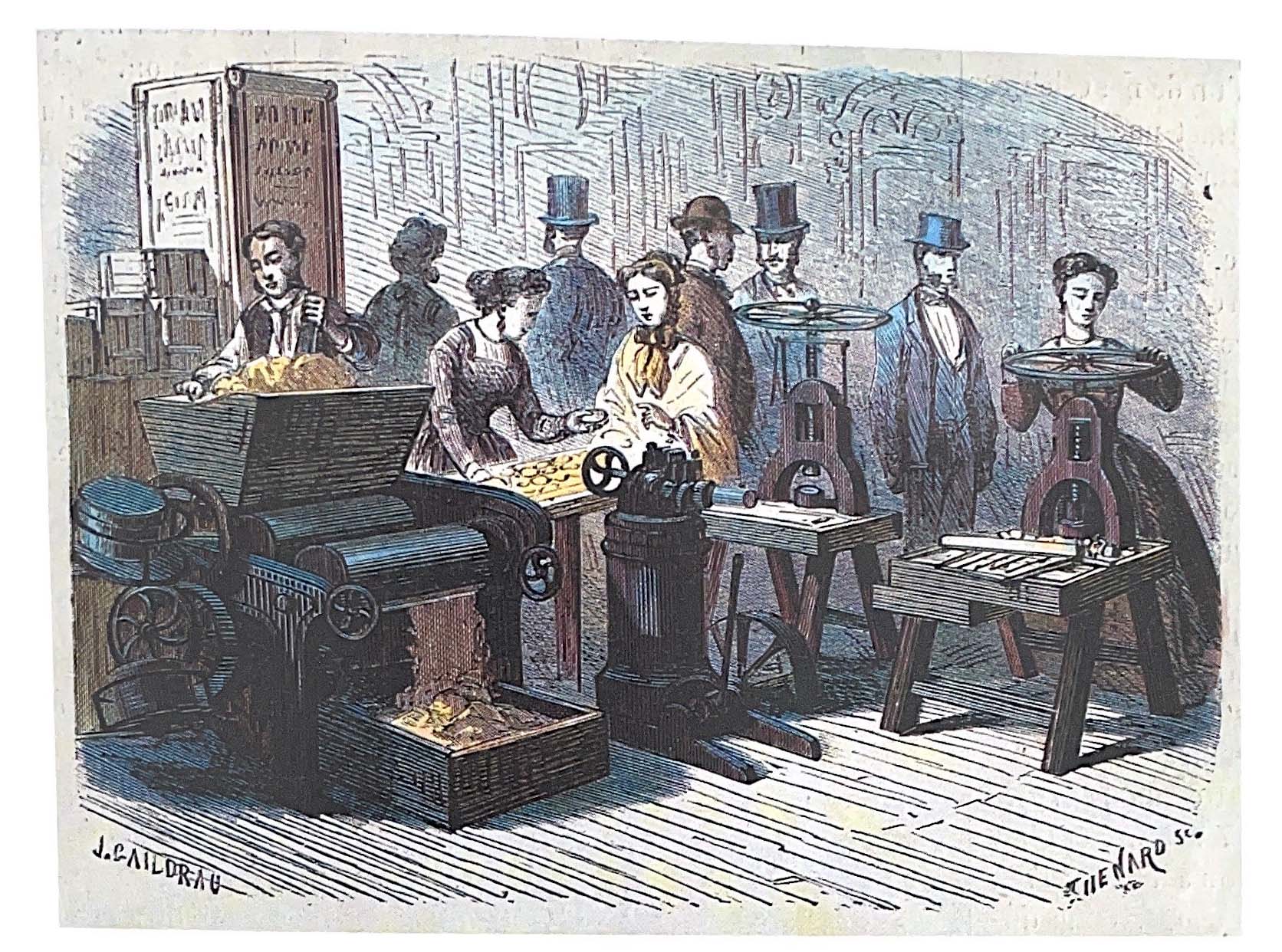 At the end of the 18th century, wood ash was replaced by caustic soda, derived from salt, and animal fats disappeared in favour of vegetable fats.

Soap then experienced a strong expansion, which was halted by the First World War, when raw materials were in short supply.

Synthetic materials were then developed, which were cheap and easy to mass produce. Maximum industrialization, poor quality oils, withdrawal of glycerin to sell it to other industries… soap is no longer a noble product and dries the skin. 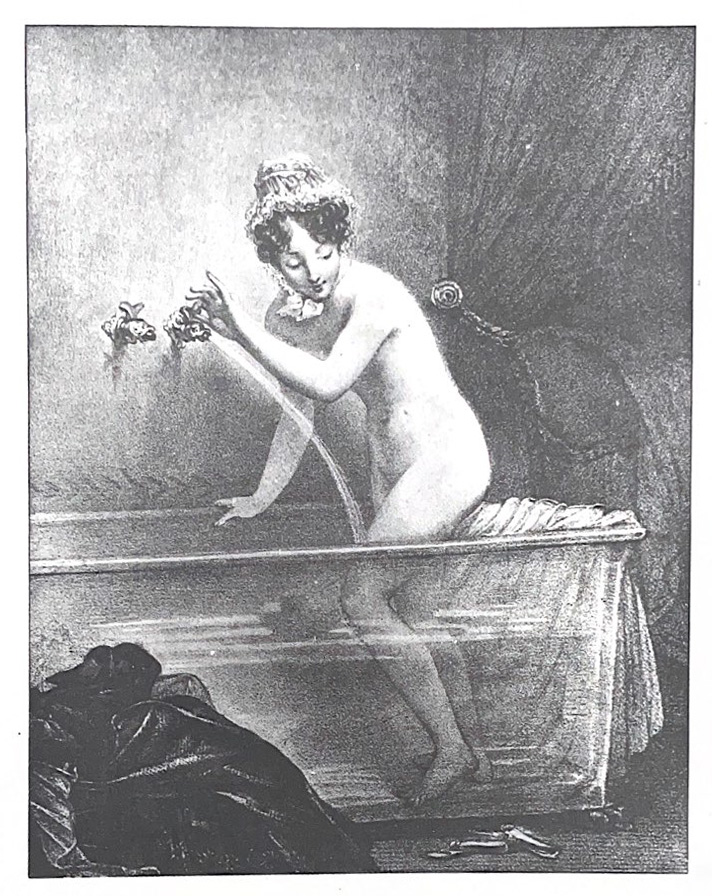 What exactly is soap?

A chemical reaction between a fatty substance (oil, butter) and soda (sodium hydroxide): composed essentially of fatty acid triglycerides, oil or butter is transformed into soap when soda is added. Water is the trigger for this reaction, which naturally produces glycerin, which is very moisturizing. In addition, the oil or butter contains unsaponifiable elements. What does that mean? This means that they do not disappear during the saponification process, because they do not react with the soda, and they are super beneficial for the skin. Examples: vitamins A and E, phytosterols, squalene… with antioxidant, nutritive, protective and softening effects.

Industrial soap, harmful to the skin and the environment

Industrial soaps mainly use palm oil as a fatty substance and heat the mixture of soda, fat and water to 120 degrees for several hours to accelerate the chemical process of saponification as much as possible. The glycerin is then extracted, removed and sold for use in other products. In industrial mode, a surplus of soda is used, which is then removed by salt water, which removes the natural glycerin and dries the skin…

The results? All the benefits for the skin of the oils or butters are destroyed by the heat, there is no more unsaponifiable fraction. 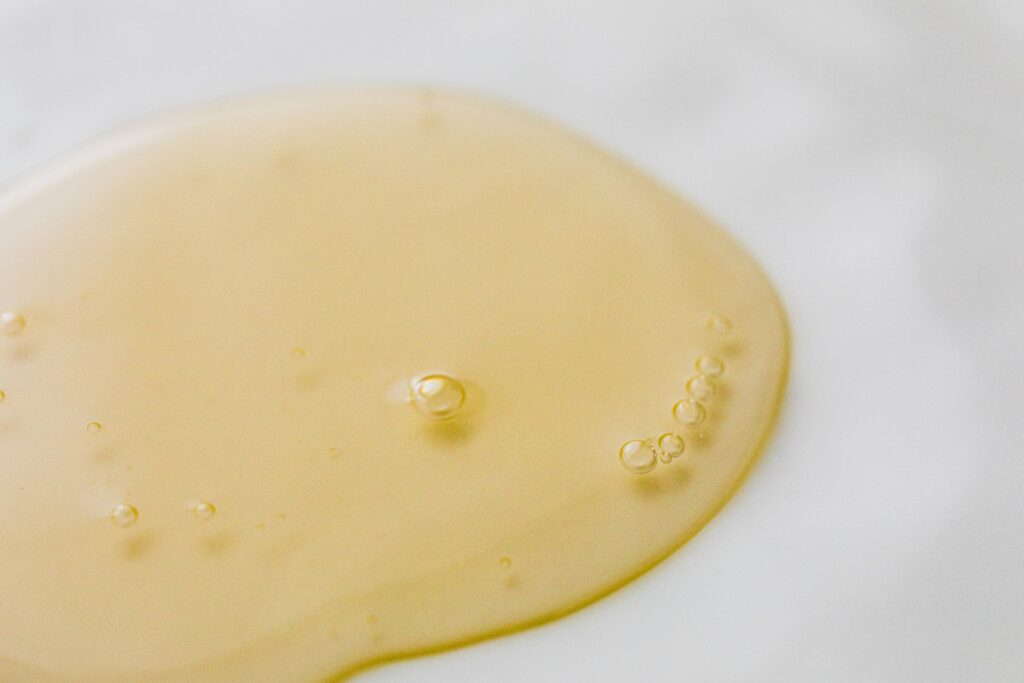 This ancestral know-how has almost disappeared, and the soap makers with it, with the arrival of industrialization, because it was too limited in production.

Cold saponification gives time to time … just as we like at TiL: we allow the chemical reaction to take place naturally. No hurry. It lasts as long as necessary until the soda is used up, we say it is a total reaction. At the end, only soap and glycerin remain.

The reaction is slow at room temperature, 24 to 48 hours, and the soap must harden for at least a month.

The oils are not heated, the butters are only melted at very low temperatures to liquefy them, which preserves all their virtues.

Cold saponification does not use an excess of soda, but rather an excess of fat (either because less soda was used or because more oil or butter was used): the soap is said to be “surgras” (unsaponified percentage remaining in the soap, from 5 to 8%).

Not only does it clean the skin, but it also moisturizes, nourishes and softens it thanks to the naturally produced glycerin and the unsaponifiable compounds that make it surgras. And here, obviously, the quality of the oils and butters determines the quality of the soap!

A perfect encounter between skin, body and mind, Le Joyeux Savon is the story of a little nomadic companion, who makes you live soft and perfumed moments, by washing you joyfully while sublimating your skin. A blend of noble materials, silky foam, divine scent, Le Joyeux Savon is also ultra-ecological. 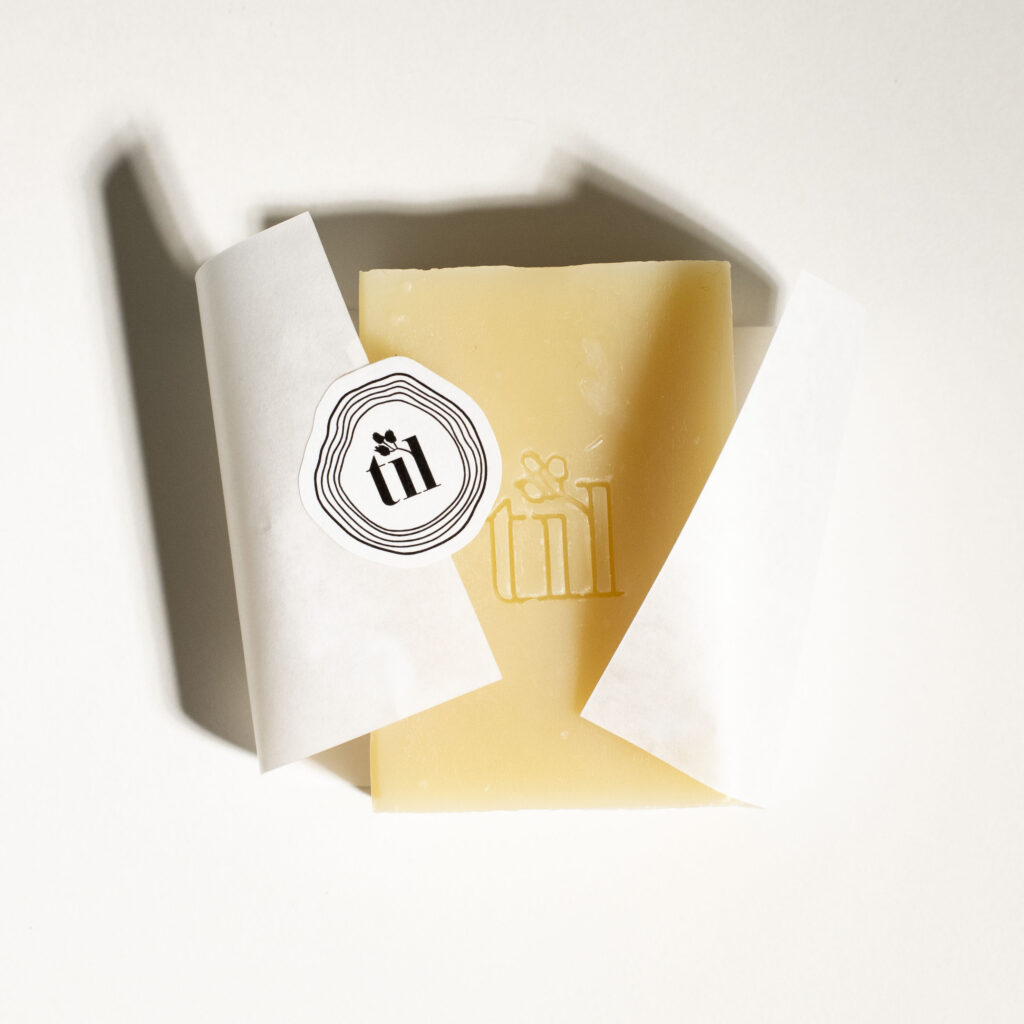 · oleic sunflower oil. Its fatty acid composition is around 80% (15 to 25% for classic sunflower), which gives more comfort and smoothness.

Very rich in vitamin E, a natural anti-oxidant, it reinforces the feeling of softness.

A high level of unsaponifiable elements, which provides infinite softness.

100% natural, unbleached, undeodorized and unrefined, it is collected by hand and reasoned in connection with the cycle of nature. The producer’s shea trees are planted at high altitudes, which gives the product a higher fat content, making the soap more pleasant to the touch and better protecting the skin’s protective hydrolipidic film. 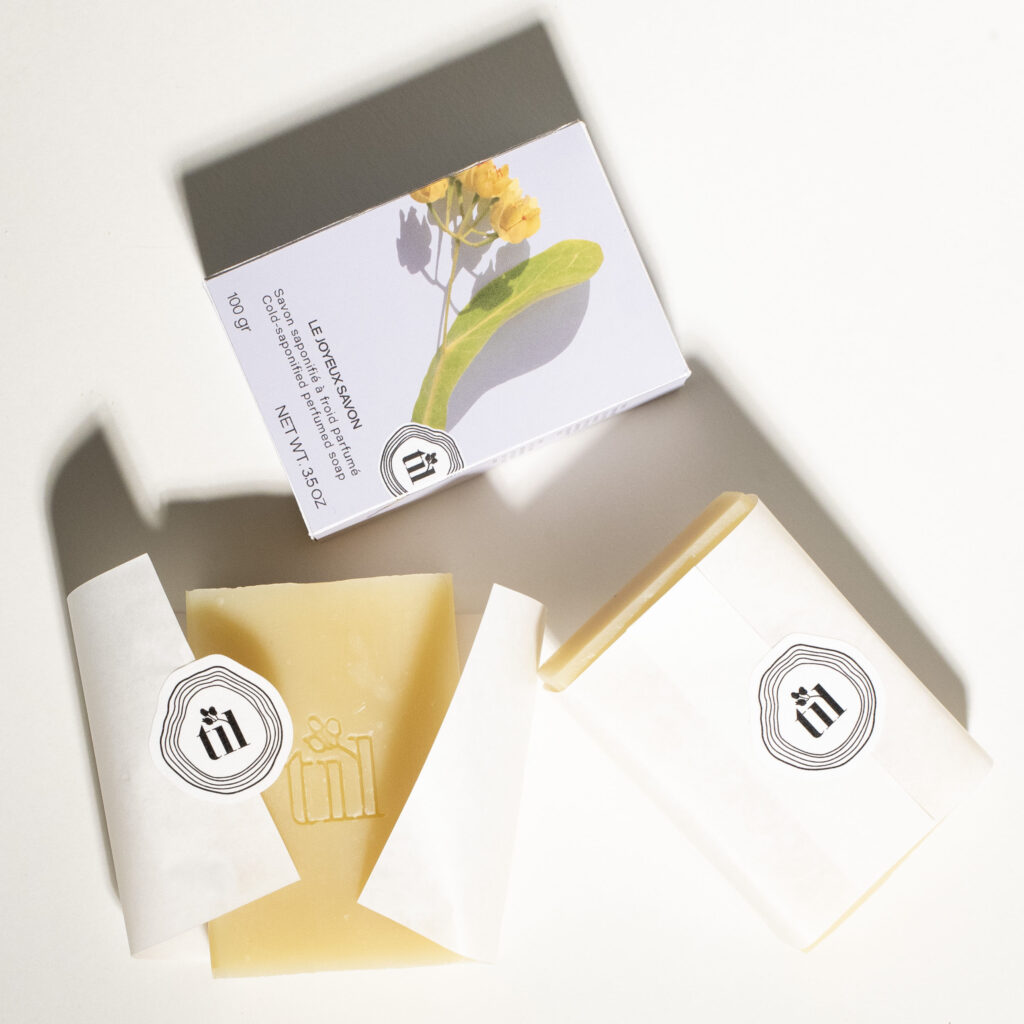 · fair for life coconut oil, from fair trade.  Of 100% natural origin, it has a very high level of lauric acid and therefore very good nourishing properties. It offers a high quality foaming and cleansing effect.

· olive oil, produced in Occitania according to the mechanical cold extraction process, which preserves all the vitamins (A&E) of the olive. It allows for deep moisturizing of the skin and is suitable for all skin types, thanks to its great softness. 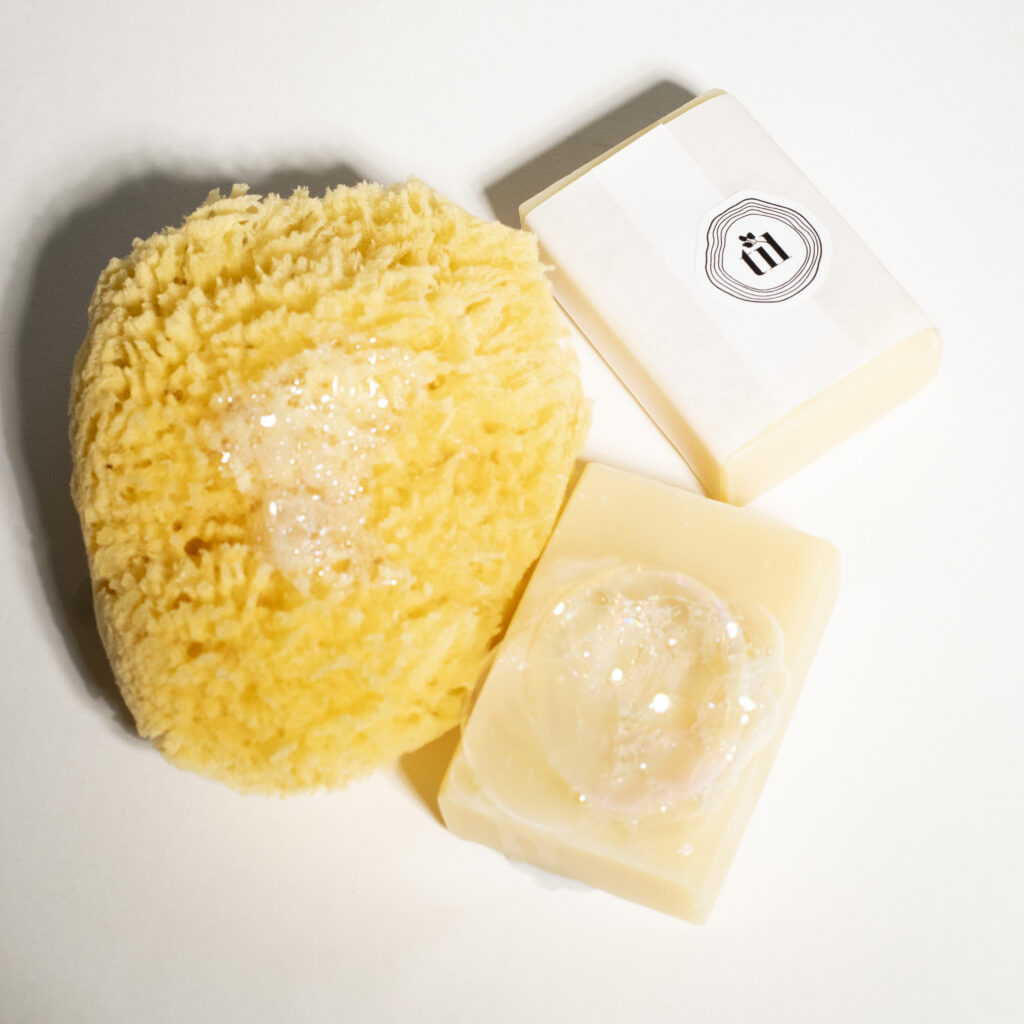 softness provided by the glycerine (8%) naturally produced during saponification. This makes it a care product for all skin types, ideal for all those who react by pulling or scratching after washing.

A light and creamy mousse with the sublime scent of linden blossom, a marvel of delicacy created by the talented perfumer Francis Kurkdjian.  It gently caresses the skin, leaving it feeling like satin. Like a little madeleine, a lightly scented imprint remains, with an exquisite sensation of relaxation and comfort.

Le Joyeux Savon is cold saponified, which means that, like our linden trees, it takes its time, as it needs 6 weeks to mature.

This artisanal process keeps the fatty acids, precious vitamins and anti-oxidants intact, like a real care product, which is good for the skin and the environment. 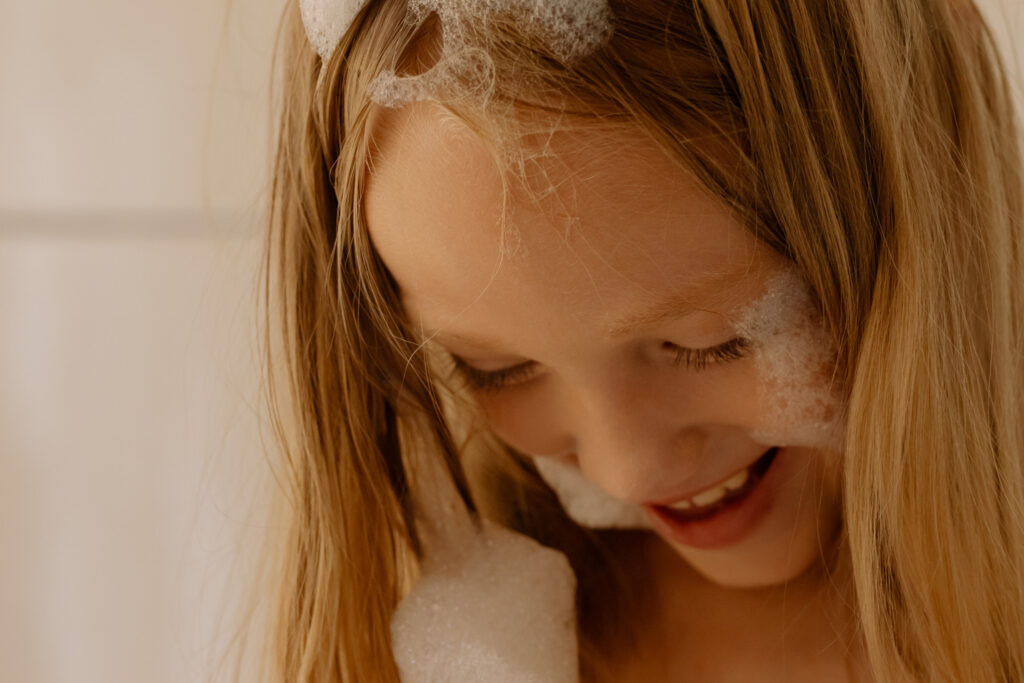 It lasts two to three times longer than a liquid soap (a 100g bar is equivalent to 30 to 40 showers), takes up little space, is biodegradable, and requires very little energy as it is not heated. Its ecological impact is thus limited to a maximum: little energy to manufacture, little water, and it does not reject any pollutant in the rinsing water, unlike industrial products.

100% Made in France, it is entirely hand-made in the Atelier de La Petite Madeleine in Troyes.

With its exceptional raw materials and its delicious smell, combined with the know-how of cold saponification, Le Joyeux Savon is a marvel of softness and fullness.

A moment of the day that sublimates the skin and makes the heart happy, everything that TiL was created for… 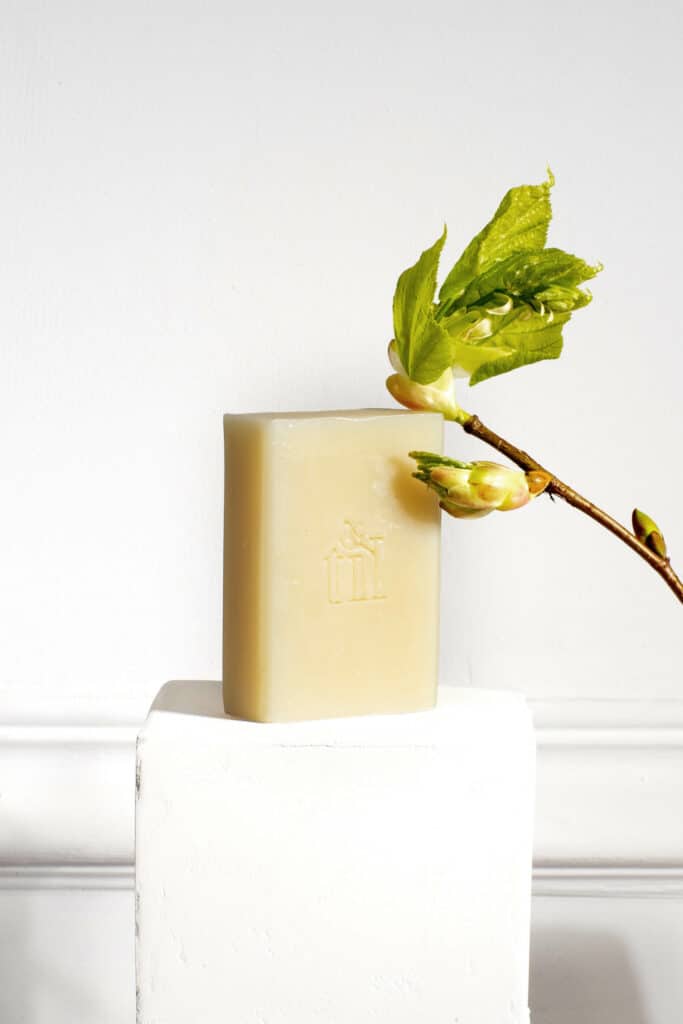 PrevprécédentHow to boost your immunity through food?
suivantCleansing the skin,  the health and radiance gestureNext

Cleansing the skin,  the health and radiance gesture

In the past, beauty often consisted of hiding imperfections due to lack of hygiene. In 2022, facial skin, which is highly exposed to aggression, must

If there is one product that goes back thousands of years, of daily use and capable of offering the best as well as the worst, 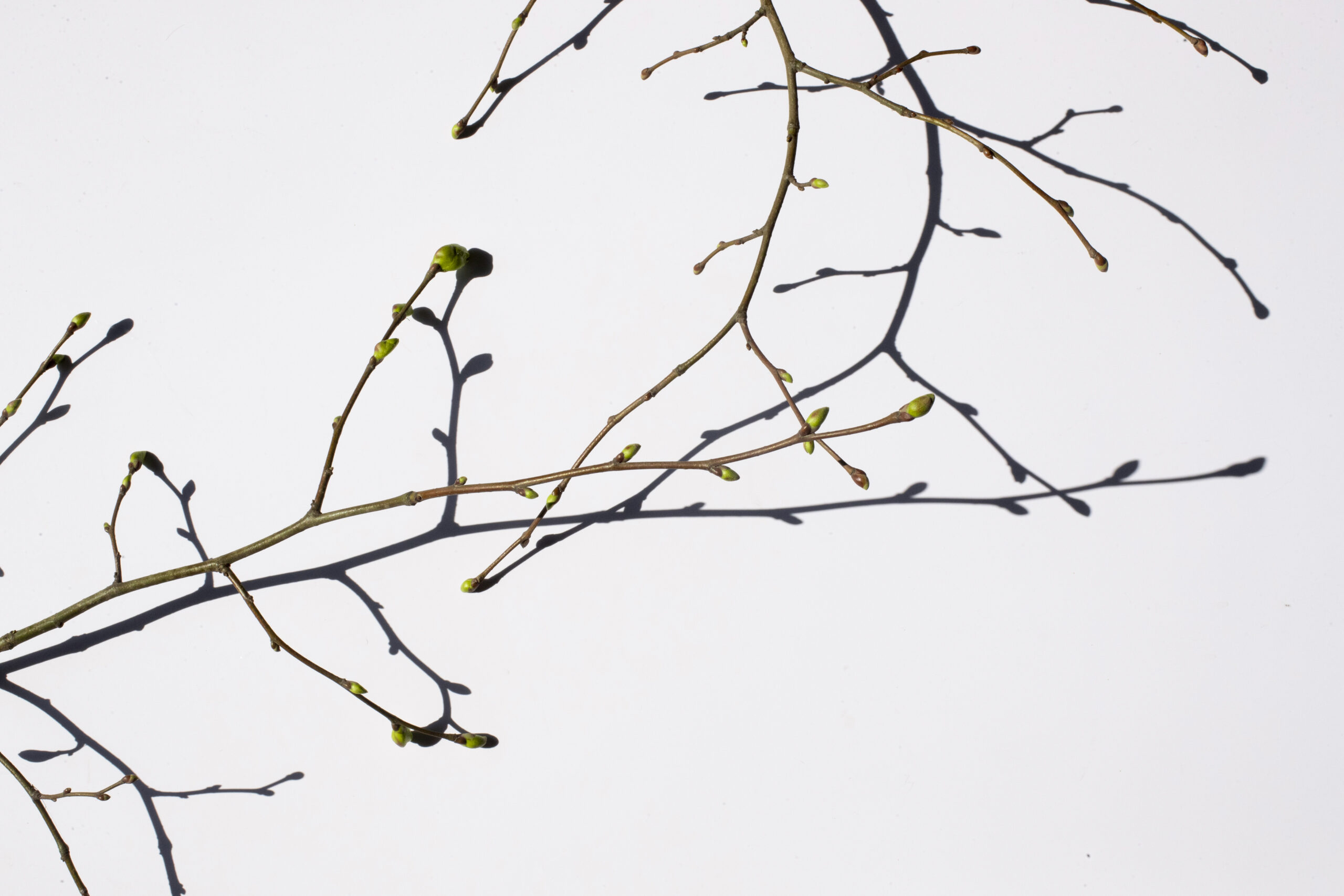 When Spring arrives, Nature, dormant during the winter, wakes up. The sap rises, the buds swell, some flowers bloom, seedlings grow… a perpetual and unchanging 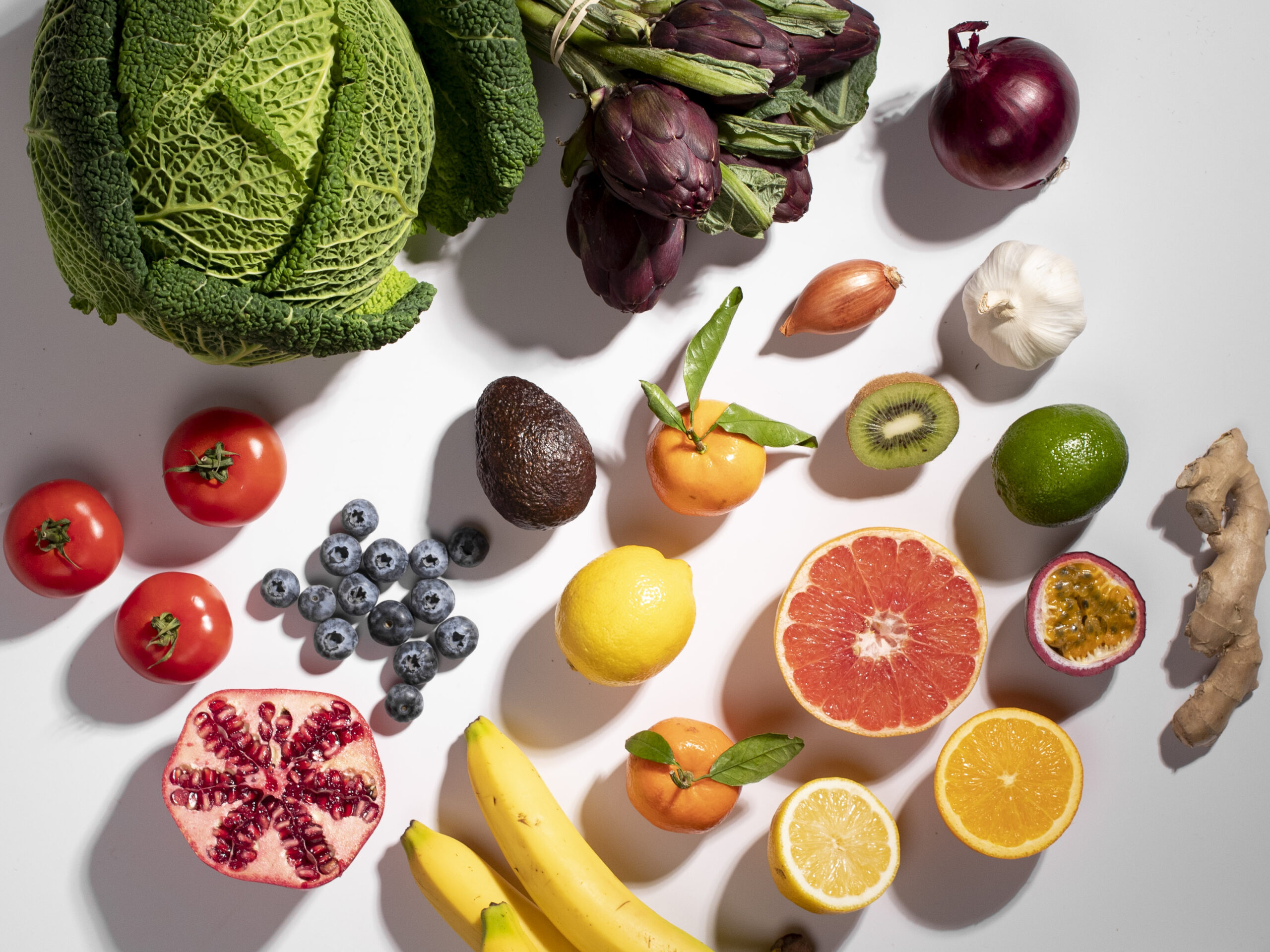 How to boost your immunity through food?

What is immunity? The Larousse defines it as all the defense mechanisms of an organism against foreign elements, in particular infectious agents (viruses, bacteria or

FREE SAMPLE FOR EACH ORDER

CUSTOMERS SERVICE ON HELLO@TIL-TIME.COM
We use cookies on our website to provide you with the most relevant experience by remembering your preferences and repeat visits. By clicking on "Accept", you consent to the use of all cookies.
SettingsACCEPT
Manage consent

Receive our latest news, beauty and well-being tips every month.